Wildcat Press Publishes Bill Dutcher's memoir "How Did I Do That? A Life of Risk and Reward"

NORMAN, Okla., June 2, 2022 /PRNewswire/ -- Wildcat Press announces the publication of Oklahoma oilman Bill Dutcher's memoir, "How Did I Do That?  A Life of Risk and Reward."  Dutcher, who founded independent oil and gas producer Anadarko Minerals, Inc. in 1990, describes his life as "a balancing act on a roller coaster." 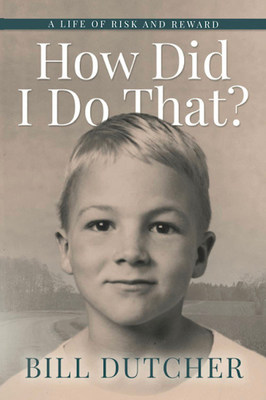 "My goal in writing the book is to show what a balanced life looks like," Dutcher explains.  "My goal in life has been to balance my family life as a husband, father and grandfather with my love of basketball, business, and writing."

The book recounts the unconventional path he has taken since his boyhood in the oil company town of Bartlesville, Oklahoma.  His adventures there included stints as a class clown in grade school, borderline juvenile delinquent in junior high, and decent halfback and point guard in high school. After majoring in journalism and walking on for basketball at the University of Oklahoma, he served four years in the Navy, with assignments in the Philippines and the Pentagon, during the Vietnam war era.  After a brief career as a newspaper reporter and an introduction to the oil and gas industry as a public relations consultant and lobbyist, he ventured out on his own, turning a $500 investment into a natural gas consulting company, an oil and gas producing company, and a real estate company.

At the age of 60, Dutcher launched a 14-year battle with Father Time, played out in basketball fantasy camps run by hoop legends like Michael Jordan, Dewayne Wade, and Mike Krzyzewski.  He is probably the only player to have competed against both Harlem Globetrotter Marques Haynes and NBA All Star Trae Young.

"Father Time is tough opponent," Dutcher observes.  "The guy is just relentless.  You push him and he pushes back."

"Apparently, my memoir has sent reviewers around the nation scrambling for their thesauri, looking for appropriate words of praise," the author jokes.

His book received The Literary Titan Silver Award, after their reviewer came up with "witty and charming" plus "compelling and engaging", not to mention "fascinating and captivating."  The reviewer added: "Dutcher's writing comes off conversational, so it feels like you are having a conversation with your grandpa."

A review by BookLife, appearing recently in Publishers Weekly, described the book as "An inviting account of the life well lived, in business and basketball.  It added: "Dutcher proves an appealing, incisive narrator."

The Prairies Book Review described the book as "Candid, gripping, original and occasionally funny" and concluded: "A stunner."  Readers' Favorite reported: "Readers are carried along through a balanced mix of hilarious and exciting exploits, profound words of advice, and serious, thought-provoking issues.  A writer for Pubby Reviews added: "So good.  A heartwarming memoir.  Funny at times, poignant at times, this memoir reads like a well-written novel."

The book is available from Amazon and Barnes & Noble.  Learn more at the book's website: www.WildcatPress.partners, or email the author at [email protected].